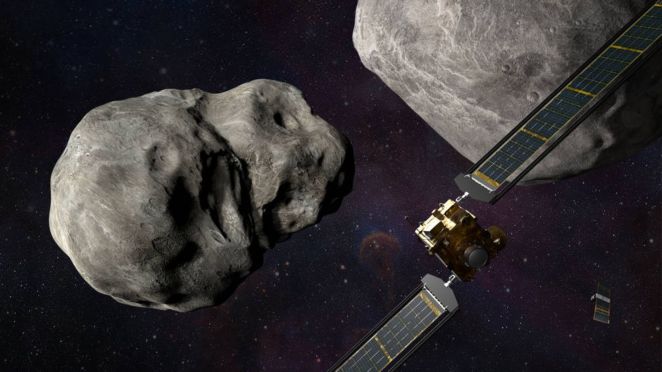 A spacecraft will deliberately crash into an asteroid at 14,000 miles per hour on Monday in what will be the very first test of a planetary defense strategy to alter the trajectories of dangerous space rocks that could one day collide with Earth.

DART is scheduled to slam into Dimorphos, which is about 400-feet-wide, at 7:14pm ET on Monday, concluding its mission with a kinetic impact maneuver that is expected to slightly shift the path of the moonlet around Didymos. NASA will livestream coverage of the impact at the link below, starting at 6pm ET.

“Up until now, we haven’t had too many options for what we might do if we found something that was incoming,” said Andy Rivkin, a planetary astronomer at the Johns Hopkins University Applied Physics Laboratory and the investigation team lead for DART, in an interview with VICE News.

“DART is the first test of how we might be able to deflect something without having to resort to a nuclear package, or sitting in our basements, waiting it out, and crossing our fingers,” he added.

Back to Top
Close
X
Watch the First Asteroid Defense Test in History Happen Live in Space Tonight (VIDEO)…Special ReportLink Vice A spacecraft will deliberately crash into an asteroid at 14,000 miles per hour on Monday in what will be the very first test of a planetary …