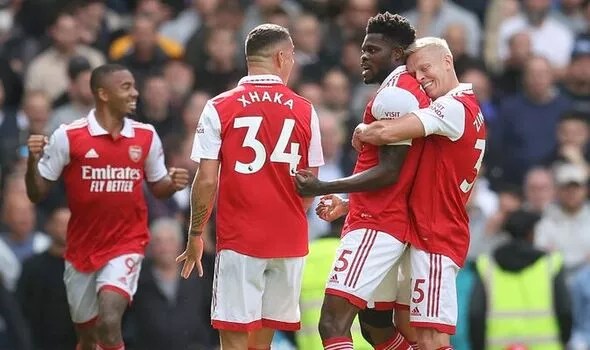 
Arsenal were able to retain their spot at the top of the Premier League after beating Tottenham 3-1 in the north London derby. Mikel Arteta’s side put an end to Tottenham’s unbeaten start to the campaign, with their intensity and flair causing their fierce rivals plenty of issues.

Granit Xhaka capped off Arsenal’s impressive performance with his goal in the 67th minute, capitalising on Tottenham’s lack of shape after Emerson Royal was sent off moments earlier for a dangerous tackle on Gabriel Martinelli. The right-back appeared to run his studs down the back of the winger, despite being deep in the Arsenal half and in no need to make the challenge.

Former Manchester City star Gabriel Jesus had put Arsenal ahead early in the second half, scrambling home from close range in the 49th minute to capitalise on a poor mistake from Hugo Lloris, his fifth goal of the campaign. His side had taken the lead initially through Thomas Partey in the 20th minute, who was an injury doubt before the game, when the Ghanian whipped a curling effort into the top corner from outside of the box.

But Arsenal’s lead lasted just 11 minutes as Harry Kane continued his rich vein of form from the penalty spot, slotting the ball past Aaron Ramsdale after Gabriel brought down his Brazil team-mate Richarlison inside the box. The Gunners claiming bragging rights will give their side a major confidence boost heading into a busy October, here’s what we learned from the north London derby.

Against Leicester, before the international break, Tottenham flourished after Yves Bissouma entered the fray and formed a three-man midfield – and Conte may regret not starting the Malian against Spurs. The Italian is set on his 3-4-3 formation, though it is preventing his side from getting a firm grip on matches against top sides.

Arteta certainly anticipated the Spurs set-up, opting to play Oleksandr Zinchenko over Kieran Tierney in left-back knowing that he will step inside to give Arsenal a 4 v 2 in the centre of the park. Ben White, too, came inside when required – and Conte may need to reconsider his plans going forward and taking on other ‘Big Six’ sides that like to dominate the midfield.

Kane’s penalty means that he is now the leading scorer in London derbies, scoring 44 goals in those matches. His opener for Spurs meant that he surpassed Thierry Henry’s record of 43 – who was present at the Emirates Stadium once more.

Prior to Saturday’s defeat, Kane had already shown that he thrives when he remains in London, scoring against Fulham and Chelsea. The goal also means that the England captain is the first player in Premier League history to score 100 goals away from home…

Back to Top
Close
X
Confirmed Chelsea team vs Crystal Palace: Azpilicueta benched, Chilwell returns, Havertz starts…SoccerLink Football London Graham Potter has made two changes to his Chelsea side for this afternoon's Premier League clash against Crystal Palace at Selhur…