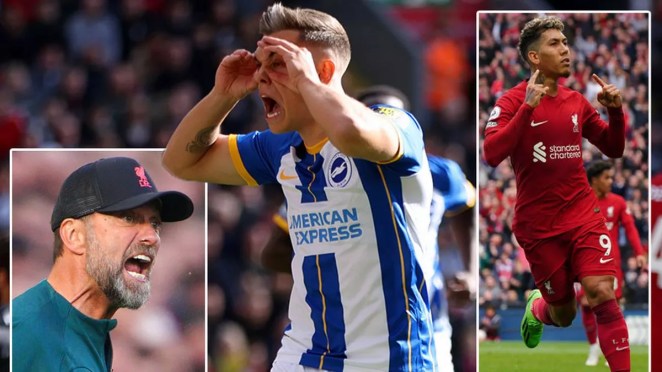 
Liverpool were denied a dramatic comeback victory by a Leandro Trossard treble as Roberto de Zerbi enjoyed a memorable Brighton debut at Anfield.

The Seagulls enjoyed a perfect start with the Belgian winger scoring twice within the opening 17 minutes. Brazilian forward Roberto Firmino gave the hosts hope ahead of half-time as he latched onto Mohamed Salah ‘s ball and slammed home – VAR overturning the referee’s initial offside call. The Brazilian then hauled the Reds level after the interval after combining with Luis Diaz.

Anfield was on its feet once again as Aaron Webster put through his own net to seemingly secure victory for Liverpool. Trossard was not done there though as he secured the matchball with another lethal finish.

Having been confirmed as Graham Potter’s permanent replacement at Brighton, Italian schemer Roberto de Zerbi was handed a baptism of fire in facing Liverpool. Should he have not been aware already, he now knows the task that faces him regarding life in the Premier League.

For large portions of the game, it looked as though the Seagulls were on their way to a memorable victory only to see the game slip away from his side.

It feels like Anfield is among those grounds to have seen most of the drama in the Premier League and that continued with Firmino’s brace and Webster’s own goal seemingly condemning the Seagulls to defeat, only for Trossard to step up in the closing minutes. De Zerbi might well need a heart rate monitor should he want to enjoy a long stint in the top-flight of English football.

Out of practice Liverpool endure another slow start

Despite having not lost the match, the Reds’ unfortunate habit of conceding the first goal in a game this season continued against Brighton. They have already found themselves behind to the likes of Fulham, Crystal Palace, Manchester United and Newcastle United alone in the Premier League so far this season.

To Liverpool’s credit, in only one of those aforementioned games had Jurgen Klopp ‘s men failed to avoid defeat – that coming against the Red Devils.

Back to Top
Close
X
Arsenal 3-1 Tottenham: Five things learned as Gunners stay top after emphatic derby win…SoccerLink Daily Express Arsenal were able to retain their spot at the top of the Premier League after beating Tottenham 3-1 in the north London derby. Mike…