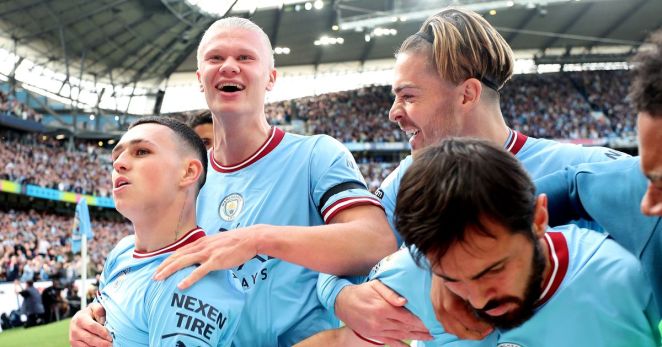 
Erling Haaland and Phil Foden both bagged hat-tricks to condemn Manchester United to more derby day humiliation in a 6-3 mauling.

The pair of Manchester City stars tore Erik ten Hag ‘s side apart from a typically rampant performance when the world was watching. Two spectacular goals Foden sandwiched Haaland’s devastating double to put the Citizens 4-0 up at half-time, as droves of United fans walked out of the goal-filled Etihad Stadium early.

Pep Guardiola enjoyed more Manchester derby delight in the second half, as Haaland and Foden punished the hapless Red Devils, who briefly put up a fight thanks to an incredible goal – albeit a consolation – from Antony. The reigning champions weren’t even close to defeat, though – even with Anthony Martial ‘s tap-in and late penalty – and proved that not only is Manchester sky blue, but the Premier League, too.

Here are seven talking points from the Etihad Stadium.

As fantasy football fans will know all too well, Pep Guardiola likes to tinker with his team and find ways to surprise us. This season has seen less bold calls than usual, but when it emerged that Nathan Ake and Manuel Akanji had got the nod over Ruben Dias and Aymeric Laporte at centre-back, it felt like the old days.

Not only that, but City were also missing the ever-present Rodri from the base of their midfield. The Spaniard had picked up an injury in training, forcing Ilkay Gundogan to fill in as Kalvin Phillips was also sidelined. But as Roy Keane noted pre-match, good players adapt.

Speaking of good players, Phil Foden wasted no time in reminding everyone of his qualities after a muted start to the season – at least by his lofty standards. But as always with a City goal, it was about the team. After United escaped a goalmouth scramble which included efforts from Kevin De Bruyne and Erling Haaland just three minutes in, the Citizens made their visiting neighbours pay with a typically slick move.

Joao Cancelo found himself with time and space on the edge of the penalty area, allowing him to slot compatriot Bernardo Silva for an inch-perfect pull-back to Foden’s left foot. The English prodigy produced a sweeping effort which left David de Gea rooted to his spot and gave City a 1-0 lead in the eighth minute.

As City continued to toy with their hapless opponents, it felt only a matter of time before a certain Norwegian striker got on the scoresheet. While Jack Grealish and Foden were causing chaos with their slaloming runs through the United defence, it was a corner which led to Haaland nodding home his 15th goal of the season.

Ten Hag’s decision to zonally mark the Citizens resulted in Eriksen ‘challenging’ him, and the 22-year-old marksman had no problem in beating the Dane. Tyrell Malacia’s attempted goalie clearance saw the ball fire back out, but Michael Oliver’s watch confirmed it was 2-0…